Digging Through the Fat. 2021. “Walking with You in Santorini”

Canary: A Literary Journal of the Environmental Crisis. 2017. “Without the Flood.”

Wildness Journal. Platypus Press. 2017. “Scene 1: Doorway,” and “Scene 2: Everyone had expectations about what should happen next.”

Blackbird. 2016. “Accountability for Your Blind Sheep,” “Somewhere Else in Texas.” 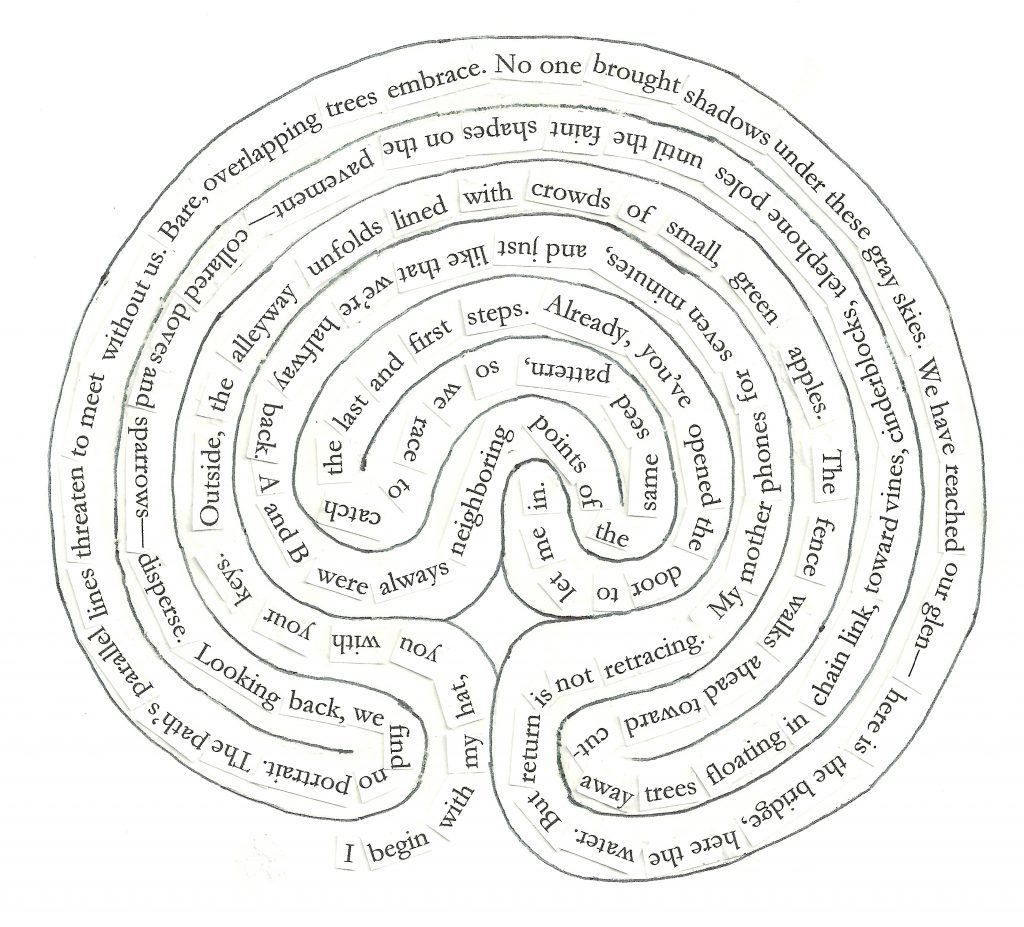 Giants' Faces Held in the Hills

Giants’ Faces Held in the Hills

Late morning we occupy the space of our shadows
escorted each week through the yard of small white stones,
of whale-blue buildings named Palo Verde, Cactus, Kennedy,
Roosevelt, and the two spruce trees called sentries.

Neither inmate nor correctional officer,
I am between their words and the invisible women
that occupy workshop with descriptions of their hair
like water from a dry spring. My co-instructor and I,

we are new statues. We are pinstriped cotton shirts
and blue pants. We are slender fish between the gates. We
are our family’s names beside students also fathers, also
husbands, also sons, also inmates in their orange reminders.

Here they say, we are not cyclopses. Thank you for not staring.
We talk about Bishop’s fish returning to the water
with its hooked gums, about Pound’s apparitions.
It seems this prison is also a world beneath worlds.

Its residents speak to the outside from booths beneath sentries.
On ceremony, some gather in the sweat lodge gated under sun.
And I see none of this until a morning when the yard
is clear of orange, when we look past our shadows and theirs.

At its finish, they say, drive safe. We exit the yard.
Exit sally port, returning our radios. Exit door and outer gate until
the desert is un-netted from barbs and chain link. Until next time,
we return to giants’ faces held in profile against the dark hills.

The River: My Mother's Spider Veins

Some say my mother’s veins are drowned water
from the Ice Age, when the original stream was flooded over.
And if that’s true, her veins are less a map and more
a pattern of lightning strikes.

Once we were all in the estuary of her.
Once we were axolotl pressing our newfound hands
into the river bottom, pushing off.

Tour of the Golden Gate: An Epilogue for Kees

Tour of the Golden Gate: An Epilogue for Kees

Mom’s harbor cruise has us
pinched by the cold edges of sky
and its momentary shadow. We rock, catching ourselves
while the bridge overhead promises to stay
and the wind rasps, curling hair into knots.

We snap pictures of the latticed triangles
pointing heads, pulling the bridge into one,
and I can’t help thinking of death,
the hole we all orbit toward.
Brief as a plunge breaking and burying
that exclamation of flight.

Later, on its paved arch and knobby bolts,
we admire the red tubes, riding from dock to tower.
And everyone waits a moment, to count the rails and suspenders,
to lean over the side, to watch people looking back.
It’s the human condition to be in transit—
always east of setting desires on the missed bus,
on the twinkling plane ascending into the dark.

When I think of you alone on the pier
or stepping on a cigarette outside Bimbo’s 365 Club,
I see that it’s easier to follow in groups, to refuse the homeless,
and to watch our step when they say so.
But sometimes we take comfort in thinking we might be missed
if our minds were in such a state to leap, to get away.
I try to believe they are the same thing—death
and that long walk to Mexico.

Migration is written on this green heartache
of home, once its own discovery of water—
the Aztecs’ Metztlixcictlico meaning
place in the center of the moon.

Some are used to hopes being what they’ve been.
But singing one octave is Kansas to Oz. For a while,

my father didn’t know that the movie changed
to Technicolor since the family TV was black and white.

In grief, we cannot explain the body’s
tenderness, its heaviness.

Without tears, the animal nurses
an old shoe for weeks.

You and I See the Animals

You and I Saw the Animals

Lion summertime swallowed us up year after year.
We sisters picked neighbors’ apricots, peaches, nectarines.
We swung our legs—acrobats on ponies—from bike pedals to handlebars.

We puffed air into the nylon of our swimsuits
to make breasts like mermaids, the water holding them up.
That was when we started wearing swimsuits.

We were wetting our hair in front of our faces
then rolling the damp sheet of it back
to look like George Washingtons,
the hose twirling in the pool
until the last warm day had already passed,
the water too cold for you and for me.

We listened to longer books on our parents’ bed,
illustrated Greek mythology. How silly all those gods and grown-ups,
chasing the sun, opening boxes, looking back.

Odysseus had built that olive tree bed, each bedpost
a growing tree trunk. But Penelope was alone, sleeping
on the left or right side of the bed, then spread out in the middle.

Each night, it was as if we could undo our own weaving . We could
start the next day as the last, living it over, perfecting it.
It was as easy as unlacing our fingers from one another.

While Odysseus was off on one of those promises, we were sure
the bed had grown enough to lift off the roof.
Inside became outside. Animals wandered in following moths following light.

We thought of lion summertime, speckled deer, antsy rabbits,
baboons, green parrots and crows sidestepping her bed’s branches,
invisible to the suitors, who only saw Penelope.

But the crows weren’t there for love, just olives, which they took
in the mornings like they do on our street, when the fruit fell purple and fat.
Stepping on split olives on bedcovers, they made crowsfeet all over.

This is the story you told me in the attic of our garage.
I could feel the spotted fur of the leopard, the feathered necks
of flamingoes. We were all of those animals at once,

until you were bored waiting for love.
You flew down the attic’s drop ladder, leaving me
in the rafters. You begin to sing.